The MN DNR just released a great new website with virtual tours of many state parks. 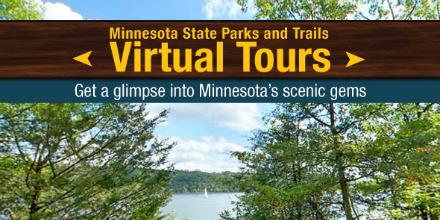 You can choose one and it will show you a panoramic view of beautiful spots in that state park. It’s excellent. It’s a great way to get a preview of what that state park is like and to help determine where in each park you should visit.

For example, you can see a 360 degree view from the new bridge and J. Cooke State park.

Or the view from the tower on Mt. Tom at Sibley State Park

Or the headwaters of the Mississippi river at Itasca State Park.

Here’s the Pioneer Press article which reviews the ten most visited state parks in Minnesota. I’ve been to all but #10.

This weekend we went camping at Frontenac State Park with good friends. I’ll just repeat – It’s really a very nice place to camp and hike and explore. Here are some photos.

Positives: It’s a North Shore Park. And it

has an impressive waterfall.

The Negatives: There’s no plumbing or showers at the campground, but I assume for many of you that’s not a big deal.
And there’s not much of the park actually on Lake Superior.

interest in the Brule River is the Devil’s Kettle. This is a bowl like area in the middle of the waterfall area where water enters but has apparent outlet. It’s apparently a bit of a scientific mystery in that they haven’t been able to determine where the water goes.

Something Everyone Wants To See: The Devil’s Kettle.

But you should also check out: The pleasant paths on the west side of the river.

Nearby attraction to visit: Nanaboujou Lodge – it has a very impressive, beautiful and historic great hall.

Interesting Trivia: This park was originally named “Brule River State Park” but was changed to its new title “after the late Judge Magney, a lawyer, mayor of Duluth, justice of the Minnesota Supreme Court, and a strong advocate of Minnesota State Parks”. It seems like he was a pretty decent guy.

out to the falls more than once – there are nice picnic spots right along the river.
We have family that lives very close to this state park and I recall cross country skiing on the west side when I was in high school. The rolling hills made it a good challenge.

What My Kids Want Me To Say: There are a lot of stairs on the way out to the Devil’s Kettle.

Final Word: Any regular state park visitor should be able to say that they’ve seen the Devil’s Kettle. And if you want to see impressive waterfalls, but you don’t want the crowds of the more southerly Superior state parks, give this park a try.

Positives: Perfect woods and river. Not too far or too close to the Twin Cities or Duluth.

Negatives: None come to mind.

General Comments: The centerpiece of this state park is the Kettle River, which is among the prettiest in the state. It has some great rock formations and low level and higher level parallel paths along the waterway.

Something Everyone Wants To See: The Whitewater Rapids

But you should also check out: Really nice forest hiking.

Nearby attraction to visit: Tobies in Hinckley?

Interesting Trivia: There is some interesting history here, with the former Banning townsite and the remains of the quarries.

Personal Stories: Two summers ago we had a very nice breakfast picnic overlooking the river (with homemade cinnamon rolls). They’ve put some nice tables and picnic platforms in perfect spots.

What My Kids Want Me To Say: The rocks aren’t too dangerous, let your kids climb

Final Word: If you’re like we were three years ago and you’ve seen the signs on your way between the Twin Cities and Duluth and have never stopped in, you really should. It’s less than a half mile from Interstate 35.

I’ve got 8 tweets and 6 followers so far!

* Depending, of course, on your definition of ‘Ministry’

Positives: The view and the woods.

The Negatives: Very small, no maps, no camping.

General Comments: If you’d like a nice hour long hike to a very nice view of the Mississippi Valley, this is the place.

Something Everyone Wants To See: The Overlook

But you should also check out: The short little walk at the end of the loop. There’s a

Nearby attraction to visit: Anywhere on the river. Both Wabasha and Winona have multiple places to experience the Mississippi more intimately.

Interesting Trivia: This park is named after a Winona business man who liked the area. He bought the land and donated it to the state for public use. It’s near three river bluffs named Faith, Hope and Charity by river captains who used them as navigational markers.

Personal Stories: After driving by it many times, my wife and I visited this park (and

met some friends) for the first time this weekend. We enjoyed the walk through the fall woods.

What My Kids Want Me To Say: Next time we should let them come with.

Final Word: It looks like you don’t need a state park sticker to visit. Try it out.

Positives: Another beautiful spot on a major river in Minnesota.

The Negatives: Nothing comes to mind.

Something Everyone Wants To See: The River.

But you should also check out: There is an outdoor ‘Interpretive Exhibit’ near the entrance which is unique and interesting to walk around.

Nearby attraction to visit: Taylor’s Falls is always fun, as is Wild Mount Ski Area.

Interesting Trivia: The Nevers Dam trail brings you to the spot where a significant dam helped the logging that used to go down the river here.

Personal Stories: We often go to this park in March/April for the Maple Sap boil. I’ve also written three poems with the Never’s Dam Trail as the back drop.

What My Kids Want Me To Say: If you climb down the steep bank into the marshy area along the Nevers Dam Trail, you can catch a crayfish.

Final Word: The view from the deck of the information center is a great place for a picnic.

Thoughts? Comments? Have you been to this park ? Do you agree with my assessment?

Every year the Star Tribune puts out their yearly “Best of MN” magazine. You may recall that last year they chose a state park that I suggested was less than the best.

This year (no, they didn’t consult me) they made a better choice: Gooseberry.

Like I’ve said, choosing a best state park would be very difficult, but at least this one would be in my top ten.

And yes, I’ll be revisiting another state park soon.

Have you heard about the new tool that allows a user to make videos from the Google Maps Street Level Photos? The results are very interesting. I made a few for Minnesota sites that work well with this medium. Take a look! (They take about a minute to load up.)

Heading into downtown MPLS (from 35W)

Did I miss any?